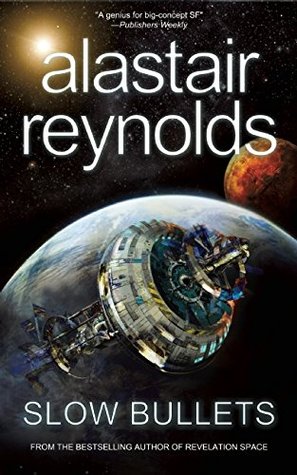 From the author of the Revelation Space series comes an interstellar adventure of war, identity, betrayal, and the preservation of civilization itself.

A vast conflict, one that has encompassed hundreds of worlds and solar systems, appears to be finally at an end. A conscripted soldier is beginning to consider her life after the war and the family she has left behind. But for Scur—and for humanity—peace is not to be.

On the brink of the ceasefire, Scur is captured by a renegade war criminal, and left for dead in the ruins of a bunker. She revives aboard a prisoner transport vessel. Something has gone terribly wrong with the ship.

Passengers—combatants from both sides of the war—are waking up from hibernation far too soon. Their memories, embedded in bullets, are the only links to a world which is no longer recognizable. And Scur will be reacquainted with her old enemy, but with much higher stakes than just her own life.

I received this book for free through NetGalley in exchange for an honest review.

There's not too much I can say about this book without giving away the story - it's such a short book. Despite it's length, the author does manage to cram a lot in and it's a well thought out story. I guess because it's a novella and therefore short, it doesn't build a vivid picture in the reader's mind of the environment or the characters.

The whole story takes place on a skipship, a ship which is both carrying soldiers from both sides of a war after the ceasefire, in addition to prisoners and civilians. The ship is malfunctioning and wakens everyone out of stasis and then all chaos breaks loose.

This is told in first person by Scur, a female (actually now I think about it I'm not sure it states her sex but I assumed she was female) soldier. She? tells the story as if she? was speaking directly to the reader which I often find a little annoying.

This is the first book I have read by the author Alastair Reynolds. Despite the "addressing the reader POV", I liked his writing style, so I would like to read more of his books in the future.