Review: Three Moments of an Explosion: Stories by China Miéville 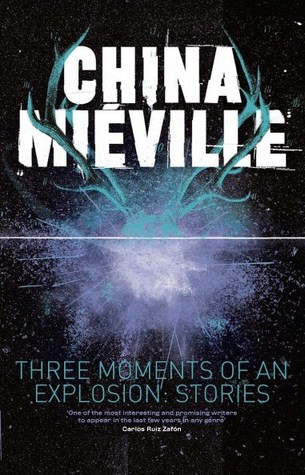 London awakes one morning to find itself besieged by a sky full of floating icebergs. Destroyed oil rigs, mysteriously reborn, clamber from the sea and onto the land, driven by an obscure but violent purpose. An anatomy student cuts open a cadaver to discover impossibly intricate designs carved into a corpse's bones—designs clearly present from birth, bearing mute testimony to . . . what?

Of such concepts and unforgettable images are made the twenty-eight stories in this collection—many published here for the first time. By turns speculative, satirical, and heart-wrenching, fresh in form and language, and featuring a cast of damaged yet hopeful seekers who come face-to-face with the deep weirdness of the world—and at times the deeper weirdness of themselves—Three Moments of an Explosion is a fitting showcase for one of our most original voices.

I received Three Moments of an Explosion: Stories through NetGalley in exchange for an honest review. I was so excited to receive this book as China Mieville is one of my favourite authors.

That said, I am not a big fan of short stories. Just a couple months ago I finished reading my first book of short stories. Normally I start, then give up. I am pleased to say that I read every story in this book. There are well over 20 stories, some are very short while others are much longer. I have to say that I got on better with the longer ones.

As with all short story collections I've attempted to read, this one has a number of stories where you are left at the end wondering what that was all about and wondering if you missed something. I had this feeling on quite a few occasions. Despite this confusion, I was also often left with a feeling of enjoyment.

One of my GR friends who loves short stories said to me that she views a short story as a photograph, that it is just a snippet of a time, a person, a place or a situation and you can't see outside the frame of the photograph. But you don't have to in order to appreciate the photograph. I really liked this analogy and I have since been keeping it in mind while I read short stories and it helps me tremendously. (Thanks Camilla!)

Some of my favourites in this collection were Polynia in which Icebergs appeared in the skies of London; The Dowager of Bees in which special cards would appear mysteriously during games of Poker with very interesting consequences; In the Slopes was set at an Archeological dig site where some strange findings are discovered; The Crawl, a Zombie movie trailer which I would definitely go to see if it were ever actually made in to a movie; Watching God, a post apocalyptic island set story where ships sit off the coast just watching; The Buzzards Egg about a guy that I really felt for who had to look after a captured God; Dreaded Outcome about a therapist who will go to the extreme to ensure her patients get well; and After the Festival which was very grim and disturbing that it game me goosebumps and made me shiver upon recounting the story to my partner.

There was quite a mix of stories, all a little strange as one would expect with Mieville. He created some awesome worlds which I would love to spend more time in. I was left with lots of questions (which is not uncommon for me at the end of a short story) but I feel ok with that.

I will definitely be reading his older short story collection Looking for Jake and Other Stories (as well as future novels).
Posted by Sarah Mortimer at 12:59