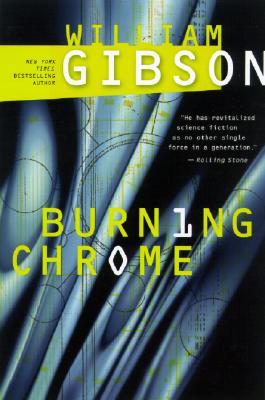 Best-known for his seminal sf novel Neuromancer, William Gibson is actually best when writing short fiction. Tautly-written and suspenseful, Burning Chrome collects 10 of his best short stories with a preface from Bruce Sterling, now available for the first time in trade paperback. These brilliant, high-resolution stories show Gibson's characters and intensely-realized worlds at his absolute best, from the chip-enhanced couriers of "Johnny Mnemonic" to the street-tech melancholy of "Burning Chrome."

The introduction at the beginning of this collection of short stories talks about Gibson's desire for stories that are told from the bottom up. Stories which are about people in the streets and alleys of the cities as opposed to being told from the people at the top, speculating on how everyday people are experiencing life. I have to agree with Gibson. These kind of stories make much more interesting reading. I guess that's why he writes stories like that too. Many of the shorts in this book are about just ordinary people (if you can just have ordinary people in Gibson's worlds). They are set in near time futures, often dystopic. Low life, high tech!

The book kicks off with the story Johnny Pneumonic. I remember seeing the film with Keanu Reeves years ago but I had no idea that it was actually a short story, let alone that it had been written by Gibson. I loved this story. It is set in the Sprawl world and Molly Millions (from Neuromancer) makes an appearance.

I liked The Gernsback Continuum as it was different to Gibson's other stories. This story showed how he can write in different genres. It made more sense, less jargon and is the first non-tech story I've read of his.

Fragments of a Hologram Rose had some interesting concepts but I didn't exactly understand what happened at the end. It was however very poetic and beautiful and I think it warrants a second reading.

Another Sprawl based story was Hinterlands which I loved. Quite possibly one of my favourites.

Other stories included The Winter Market and Burning Chrome.

I have given this book 3.5 stars. Mainly because there were a couple stories I didn't enjoy so much or understand what was happening (which is often the case with me and short stories).

I do like Gibson's writing style so I am looking forward to reading more of his work as this book and Neuromancer are the only ones I've got to so far.
Posted by Sarah Mortimer at 05:20