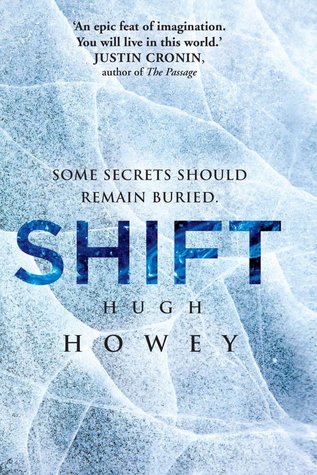 In a future less than fifty years away, the world is still as we know it. Time continues to tick by. The truth is that it is ticking away.

A powerful few know what lies ahead.

They are setting us on a path from which we can never return.

A path that will lead to destruction; that will take us below ground.

The history of the silo is about to be written.

Our future is about to begin.

This is the second book of the Silo series although it is a prequel to the first book, Wool Omnibus. I loved Wool because it was different – I love dystopian stories but the ones published in the last few years have been marketed more as YA so it was nice to find a series of books which were targeted for adults. Wool was suspenseful and I couldn't stop reading.

Shift is quite different. It was still good though and was an integral part of the overall Silo story. It just lacked the suspense that Wool had. It was still a page turner though - it was good to see how the dystopian world came about, who was responsible and why the silos were arranged and ran like they were.

Because it's a prequel, the vast majority of the characters were new. We only became reacquainted with some of the ones in Wool in the last half of Shift when the time period progressed towards that of Wool events.

Even though it's a prequel, I would say it is necessary to read the books in published order because if you were to read Shift first, I think some of the plot twists in Wool would be ruined for you.

Howey doesn't describe the characters that much in this series – not how they look anyway so it is left to the reader to conjure up an image of what they look like. Their personalities are explained as well as what their beliefs and views are on the goings on in the silo. The characters are an important part of the story as in any story but it's as if Howey has made the silos out to be the main characters – they are described in more detail which has given me a real sense of what it must be like living within the confines of them. I like this unusual approach.

I thought the ending was rather abrupt but that was more because my kindle was tricking me, saying I had some more pages left to go but they ended up being book group questions!

It set things up nicely for the next book, Dust, which I have already purchased and look forward to reading. I'm excited to find out what happens next.

Shift: View on Amazon || View on Goodreads
Posted by Sarah Mortimer at 02:39