Review: The Lies of Locke Lamora by Scott Lynch 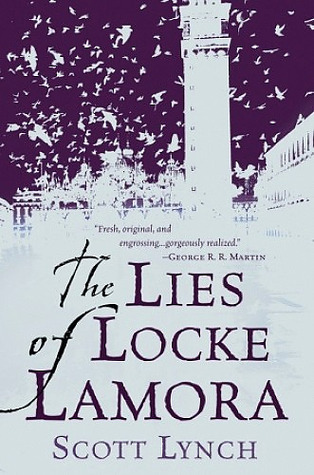 They say that the Thorn of Camorr can beat anyone in a fight. They say he steals from the rich and gives to the poor. They say he's part man, part myth, and mostly street-corner rumor. And they are wrong on every count.

Only averagely tall, slender, and god-awful with a sword, Locke Lamora is the fabled Thorn, and the greatest weapons at his disposal are his wit and cunning. He steals from the rich - they're the only ones worth stealing from - but the poor can go steal for themselves. What Locke cons, wheedles and tricks into his possession is strictly for him and his band of fellow con-artists and thieves: the Gentleman Bastards.

Together their domain is the city of Camorr. Built of Elderglass by a race no-one remembers, it's a city of shifting revels, filthy canals, baroque palaces and crowded cemeteries. Home to Dons, merchants, soldiers, beggars, cripples, and feral children. And to Capa Barsavi, the criminal mastermind who runs the city.

But there are whispers of a challenge to the Capa's power. A challenge from a man no one has ever seen, a man no blade can touch. The Grey King is coming.

A man would be well advised not to be caught between Capa Barsavi and The Grey King. Even such a master of the sword as the Thorn of Camorr. As for Locke Lamora . . .

I really enjoyed Lynch’s writing style and the way he built the characters and the world they lived in. I enjoyed getting to know Camorr, the town in which the book is set, and how life worked there. Locke Lamora is a strong character which I think has been developed really well. This is quite possibly the first book I have read which focuses on thieves and I really enjoyed the mischievousness of the characters and the banter that goes on between them.

I did think it started a little slowly – just the first 20-30 pages perhaps but then all of a sudden I was sucked in and I can’t say at what point or why. I just was! This book just got better and better as I read!

This books tells the story of orphan boy Locke Lamora, who is taken under the wing of a “priest” who in reality is the garrista (leader) of the band of thieves known as The Gentleman Bastards. These are not just ordinary thieves though – they are confidence men and play the long game. And they are good at it!

The narrative switches around a little, detailing both Locke Lamora's childhood when he first becomes a member of the Gentleman Bastards, and him grown up as their leader. At first I thought this was going to make for a complicated read but I soon got in to the flow of things and I really enjoyed it. This style also fleshed out the characters allowing us to get to know them better.

One of my favourite parts was the women’s shark fighting contests in the first quarter of the book. I also loved the fact that there were floating trees in the canals – random I know! I found it hilarious reading about young Locke Lamora going to see the Capa on the back of a Gentled goat because he had a hang over. This is just one example of humour being included throughout the book which I really liked.

The book finished in the exact opposite way to which I thought the book started – those last 100 pages flew by and was action-packed to say the least.

This book was a great start to the series. I am currently reading the sequel, Red Seas Under Red Skies, which I will review and post on here once I'm finished.

The Lies of Locke Lamora: View on Amazon || View on Goodreads
Posted by Sarah Mortimer at 02:41