Review: The Scar by China Miéville 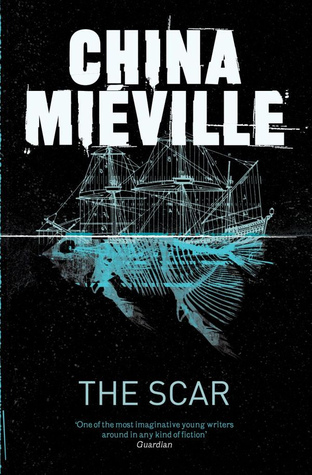 The second Bas-Lag novel form the author of Perdido Street Station, an epic and breathtaking fantasy of extraordinary imagination.

A human cargo bound for servitude in exile.

A pirate city hauled across the ocean.

A hidden miracle about be revealed.

This is the story of a prisoner's journey. The search for the island of a forgotten people, for the most astonishing beast in the seas, and ultimately for a fabled place - a massive wound in reality, a source of unthinkable power and danger...

This is the second book in the Bas-Lag series. It's not like other fantasy series where the setting and characters are the same in all the books. Mieville always likes to do things differently. So in this series, all of the books are set in the same world, Bas-Lag, but the setting and characters are completely different. So personally, I don't think it matters too much which order you read them in. The events in The Scar happen after that in Perdido Street Station but you don't need to have read Perdido in order to understand the goings on in The Scar.

I loved Perdido so much. I think I rated it 4.5 stars and the only reason it didn't get the 5 was because it was very very descriptive and took an age to read. So I was expecting more of the same with this book but I was pleasantly surprised. This book could easily have been very wordy especially because we had new characters, a new setting and several new alien races introduced. Mieville really hit the right balance with descriptiveness in this one. Or maybe I'm just more used to his writing style now. Either way, I was gripped by the story straight away, I couldn't put it down and I read it much quicker than the first one (this one is much shorter though).

The story focuses on Bellis Coldwine, who has fled New Crobuzon on a ship destined for one of its colonies. Bellis has been recruited as an interpreter as she is able to speak various different languages. The ship she is on is full of a real mix of people, including a large number of Remade. While on route, their ship is commandeered by an agent of New Crobuzon and then quite quickly besieged by pirates. The ship and its crew are taken to Armada, a huge floating pirate city in the middle of the ocean. It's dark, seedy, unsettling and dangerous for the newly arrived. This city was described beautifully and I have a great imagining of what it looked like and what it must have been like to live there. It was great being there during the book but it's a place I'd definitely stay clear of in reality!

So on Armada, those who are still loyal to New Crobuzon are locked up while the others are given jobs and a wage to help grow the society. Everyone is equal. While they are free, they cannot leave Armada. Ever!

Then the craziness begins and I can't even begin to explain what went on. It's all good though. If you like pirates, mythical sea creatures, alien races, strange magical/technological machines, double crossing, and sea battles then you'll love this book. I did! And I have to say that I enjoyed it much more than the first book in the series. I can't wait for the third, Iron Council, which I have just bought.

The Scar: View on Amazon || View on Goodreads