Review: Paradigm by Ceri A Lowe 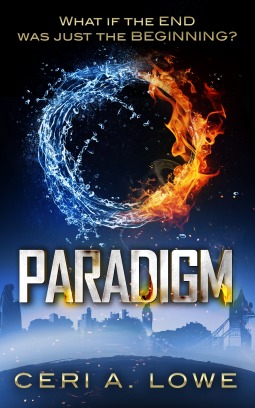 What if the end of the world was just the beginning?

Alice Davenport awakens from a fever to find her mother gone and the city she lives in ravaged by storms – with few survivors.

When Alice is finally rescued, she is taken to a huge underground bunker owned by the mysterious Paradigm Industries. As the storms worsen, the hatches close.

87 years later, amidst the ruins of London, the survivors of the Storms have reinvented society. The Model maintains a perfect balance – with inhabitants routinely frozen until they are needed by the Industry.

Fifteen-year-old Carter Warren knows his time has come. Awoken from the catacombs as a contender for the role of Controller General, it is his destiny to succeed – where his parents failed.

But Carter soon discovers that the world has changed, in ways that make him begin to question everything that he believes in. As Carter is forced to fight for those he loves and even for his life, it seems that the key to the future lies in the secrets of the past...

I requested through NetGalley to receive this book for free in exchange for an honest review. This is my first disclosure. My second disclosure is that I am a thirty-something reading a YA book so I am not it’s intended audience.


“You have five minutes of this life left.”

The first line of the book is a great opener and really draws you in. But then just a few sentences later it mentions something about the over thirties which gets my back up.

“If he could keep himself together, then surely the old-timers should be able to manage it. It just confirmed everything he knew about anyone over thirty.”

So a bit of a mixed start for me! Despite the inference that I’m an old-timer, I carried on with the story. ;-)

I really like how the story was told. It is written in third person from two different POVs and two different time frames. Confused? Well there’s no need to be as it’s really well done. Carter Warren, a 15-year old boy, shows us what it’s like in a present day post-apocalyptic world while Alice Davenport shows us how life as we know it changed forever and how the new society was formed. I thought this was quite unique among the dystopian/post-apocalyptic stories out there as we generally see what it’s like after the s**t has hit the fan as opposed to as it’s happening. Each chapter switches POV to progress the story and each story line makes things fall in to place in the other.

While we don’t know exactly what has caused the Storms, it’s obviously global warming related in some way. The Storms came followed by floods then people died. Any remaining stragglers were picked up by Paradigm Industry and taken underground to sit it out until a society could be established above ground again. This is the bit I found scary! Not in a horror story kind of way but that this could happen; Corporations gaining control and being in charge is where we’re heading now. While we still have a government in our country many of the MPs have shares or some other involvement in big businesses and banks, so laws are passed to favour themselves, we have schools sponsored by companies and things being tendered out to private companies such as homeland security and prisons to name just a few.

So Back to the story! 87 years down the line, technology has advanced significantly and people are chosen by the Industry to go back in to the catacombs underground to be frozen in stasis for an unknown period of time to be awakened in the future to bring balance to society. Carter Warren is one of those people who were chosen and frozen just aged 15 to be brought back in the future as a contender to be Controller General, the person in charge of the Industry and Society as a whole.

I forgot to mention that the book is set in London too which I also liked being a Brit myself. There are so many books set in the US within this genre so it's good to see we get our own one now.

Whilst reading, I felt like I was waiting for the obligatory romance to start which always seems to crop up in YA books. But it didn’t happen which was quite refreshing. There were some mentions of crushes and love and the odd kiss and cuddle but it wasn’t the main focus of the story. And no angst!

A few interesting issues are raised in this book. Carter has sex for the first time, aged 15 on his going away party, and gets a girl pregnant with twins. I thought this sends a clear message to the YA audience to practice safe sex and that even on the first time you can get pregnant, although the message is more implied rather than being spelled out. It also briefly addresses paedophilia/sexual assault with Alice being attacked by an old man whilst she was under his care. Difficult topics to broach but they were woven in to the story nicely and sensitively.

I felt that some of the things that happened were predictable while other things happened which were really unexpected (but were good) and blew me away. I also felt that some characters were well thought out and developed, for example Alice and Carter, while others not so and it was difficult to understand who they were and what they stood for. At times things happened and I wasn't sure what, leaving me feeling confused although that eased off as things were explained later in the book.

I really liked that it covered the creation of a post-apocalyptic world and the reasons why they made the choices they did and the omissions they made to society and life. I also get why those restrictions which once worked no longer do when time moves on and why 87 years later people are rebelling against the rules.

All in all I thought it was an enjoyable read. Will I be reading the sequels? I’d quite like to know how the story progresses so I probably will.